Want to Put Your Faith into Action?

Have you ever desired to put your faith into action, but had no idea where to start?

Don’t fret! You are not alone. Passionate believers today experience similar difficulties. We volunteer. We sing praise. We build houses.

But are we 100% confident that these are the actions that God truly desires?

Thankfully, the Bible contains many great examples to help us know what faith in action really looks like. Let’s examine true “faith in action” through the lives of Abraham, Noah, and David, three believers acknowledged by God for their faith.

-“By faith Abraham, when called to go to a place he would later receive as his inheritance, obeyed and went, even though he did not know where he was going.” Hebrews 11:8 (NIV)

When looking at examples of putting faith into action, Abraham is considered to be at the top of the list. The history of Abraham is a stunning example of someone who trusted in God and His promises, and whose actions proved his firm belief in God.

One day, God called Abraham to leave his father’s house and upon receiving this command Abraham left immediately. He did not knowwhere he was headed nor the events to transpire along his journey, yet he obeyed God’s command. 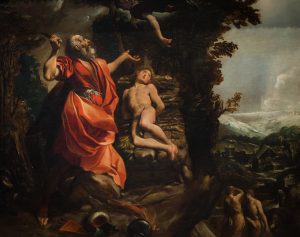 Abraham’s faith is further demonstrated by his obedience to God in regards to his son. While along his journey, God promised Abraham that he would have a son. Now, Abraham and his wife Sara were very old at this time, so you could understand how difficult it would be to believe that you could have a child at the ripe age of 100 years old. Nonetheless, Abraham believed God and soon enough, the promised child, Isaac, was born to Abraham and Sarah. Next, God commanded Abraham to sacrifice his son Isaac. Initially, this may seem like a very harsh and cruel command.

However, previously God had promised Abraham that through Isaac, Abraham would have a numerous amount of descendants, therefore, keeping this promise in mind, Abraham took his son up the mountain to sacrifice him. Obeying God without hesitation, Abraham knew God would fulfill His promise even if it meant having to resurrect Isaac.

Yet, before Abraham could sacrifice his son, an angel appeared before him and stopped the sacrifice. Since, Abraham has shown complete obedience to God, which demonstrated his faith in God’s promises, he would not need to sacrifice his son as his willingness was enough to prove his faith in God. Instead, Abraham was provided a ram to sacrifice in Isaac’s place, and as a reward for his faith, God promised to bless him and his descendants for many generations.

What does faith do for us? Ultimately, Abraham’s faith in God was not based on his own understanding nor his own emotions but upon the word of God that was to be fulfilled. In perceiving God’s faithfulness in fulfilling His promises, Abraham was able to develop a heart of obedience to the Lord and was therefore blessed.

It can be difficult perceiving Gods love and faithfulness at times, but here are some bible scriptures on love to start building your faith!

2. How are Faith and Action Related?

Noah (The Flood and the Ark):

-“Noah did everything just as God commanded him.” Genesis 6:22 (NIV)

Another remarkable story of putting faith into action is that of Noah and the flood. As the world had become filled with wickedness, God promised to send a flood to judge Adam’s generation for their sins. Yet, He would not eradicate all of mankind, but instead selected a man called Noah because he was a righteous man.

God gave the command to Noah to build an ark, which would be a place of salvation at the time of the flood. Noah was then sent to warn the people of that generation of the soon to come destruction as those who were willing to listen would prove to be righteous too if they followed the command of God to get on the ark. 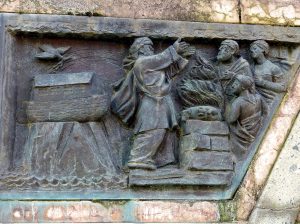 However, despite hearing Noah preach warnings about the flood for nearly a hundred years, the people refused to listen and dismissed Noah as a crazy old man. You can only imagine the hardships Noah endured in obeying God, yet he did not relent as he too desired to save others who were willing to listen.

Because he had faith he also had hope in Gods plan for salvation upon the ark. When the flood finally came, ultimately it was only Noah and his family who were saved upon the ark. All who refused to listen were swept away by the flood waters.

Through Noah’s persistence in preaching the word, believers today are able to observe how his heart was similar to God’s in wanting others to be saved. If one has true faith and hope within God, that individual will be able perceive the heart of God and reflect it in their words and actions. In Genesis, it describes man to be created in God’s image and likeness, therefore if we are those truly born again then we will also live godly lives in accordance to God’s commands, similar to Noah.

Noah had hope in the promise of salvation that was birthed out of faith and this is what moved Noah to take action in what was right. How are faith and hope related? Hope is like the bridge from faith to action. If one has hope in something they will do whatever it takes to attain it. Here are some encouraging verses to see what the Bible says about faith and hope!

3. How Do You Demonstrate Faith in God?

-“David said to the Philistine, You come against me with sword and spear and javelin, but I come against you in the name of the Lord Almighty, the God of the armies of Israel, whom you have defied.” 1 Samuel 17:45

Have you heard of the story of David and Goliath? The small, young shepherd boy who boldly went up against a giant. David, the son of Jesse, was the youngest of his brothers  while his brothers were great warriors in Israel’s army, David stayed at home and helped his mother. On the physical exterior and in man’s eyes, there was nothing to show David  as any kind of fearless warrior.

However, as the Philistine army rose up against the Israelites. A mighty Philistine struck fear into the hearts of the Israelites, and because he was mighty and strong on the outside the Israelite army soldiers did not think they could win. David came up to the army to bring them food and was ridiculed by his brothers. Yet, David saw fear in his brother’s eyes because of the giant, Goliath, and his gentile army, which angered him. 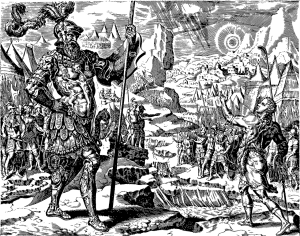 He then ran to King Saul and boldly told him that he would slay the Giant, similar to how he had slain the lion and the bear that preyed upon his father’s flocks of sheep. Then with courage, David stood before Goliath and declared that even though the Philistine’s had come with their swords and spears, David came in the name of the Lord and God would grant him victory.

David knew the Israelite army belonged to God, and that no army, no matter how strong on the outside, could defeat God. David then picked up a rock into his sling and struck Goliath, the Philistine Giant, down.

From David’s story, we learn it is not what we wear or what we look like that determines our faith, but rather our willingness to obey God and the confidence we have within His word. As David knew of God’s power and strength, he was not intimidated by a large army with many sharp weapons because he had faith in knowing that whomever God is with will be victorious and overcome. As believers today, are we confident in the word of God? Do we understand the Bible well to base our faith upon its scriptures? Let us reflect on what is my faith based on?

It may be hard to put our faith into action in our daily life. We may lack confidence in the hope we have or even in the promises of the Bible. Before we try to put our faith into action, a good place to start is to build your faith through understanding Gods heart and will through the scriptures. As we saw the great examples of faith in action through the believers recorded in the Bible were those who knew clearly the Word of the Lord and His commandments and the hope that is promised for a believer.

If you would like to learn how to build your faith in God: The best place to begin would be by joining a bible study to better learn about God and His promises! 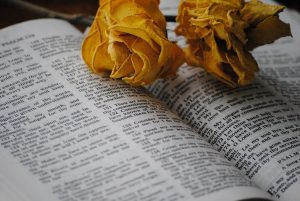 You can find more ways to put your faith into action and Bible resources Here!